The Astrology of Health 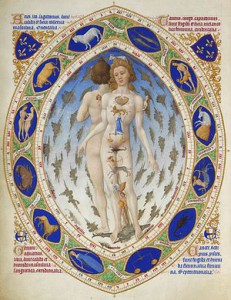 “He who does not understand Astrology is not a Doctor but a fool”- Hippocrates, father of modern medicine

Medical astrology is one of the oldest forms of astrology practiced. It was used to find the cause and cure of illness. Based on Hippocrates philosophy of medicine.
Hippocrates was the first to believe that illness was caused naturally and not by the gods! This was are revelation to those of that day and age. He devised a theory of medicine based on the four cardinal elements known as humors. The concept is if one element or humor is in excess or deficient the body will be imbalanced resulting in illness. There are four humors; Earth= Black bile, Fire= Yellow bile, Water= phlegm, Blood= Air.

Hippocrates theory spread throughout Europe like wild fire. Famous for its ability to bring back health. It was the first, and most widely used medical philosophy in the late Middle Ages. Although it did gain bad press for the practice of blood-letting; bleeding of patients with an excess of Air, which sometimes resulted in a rather painful death it was the beginning of medicine as we know it today.

Medicine has come a long way since then, thankfully. These days the wisdom of Hippocrates theory can be used with a little less literalisation and thus has become more relevant.

Astrologers use the wisdom of the humors to ascertain the right herbs and practices to bring balance back to the body. For example, astrologically an illness caused by a water element is balanced by fire. Basically, a cold is a water illness and is treated with its opposite-fire, thus heating, sun, and all things warm- Chilies/ Cayenne pepper, echinacea and garlic will all cure the symptoms and eventually the cold. 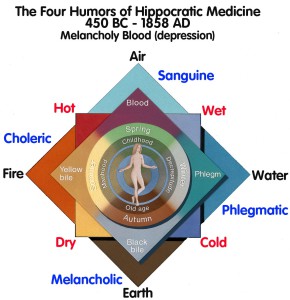 To this day, Astrologers can read the future of your health in your chart. The cause, type of illness, its genesis and length are commonly fixed aspects of a person’s karma that cannot be avoided.  In these cases, knowledge is the best preparation. 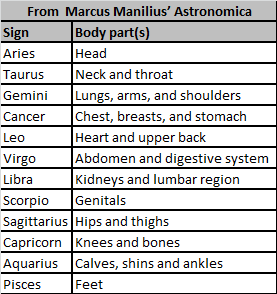 Different signs rule various parts of the body. If a sign or planet is debilitated in your chart it causes illness. Transits and planets determine the beginning and length of illness.
Accidents can be predicted, the quality of the doctors, treatment and state of the medical facility can all be ascertained.

A Decumbiture chart is an additional chart- a horary medical chart. Drawn for the time when the patient takes to bed it indicates the length, prognoses and medicine involved.
Medical astrology can also be used to tell whether you should have surgery, what your diagnosis will be, and how long the recovery will take.

Medical Astrology is a complex system and needs a well-educated astrologer who will take the time to advise you carefully.

Laura Selena is a qualified Astrologer who practices in Cape Town. Astrology via Skype email is available for those with busy lives or living outside of Cape Town. Newbies or Veterans to Astrology all welcome!

Synastry – The Power of Relating

Synastry – The Power of Relating